Kiss: Music From The Elder

Kiss: Music From The Elder

Music from “The Elder” was the first album with drummer Eric Carr and the last album to feature guitarist Ace Frehley, until their 1996 reunion Alive/Worldwide Tour… apart from appearing on the cover of the compilation album “Killers”  , their next album “Creatures of the Night” , AND a handful of promotional appearances with the band until 1983. 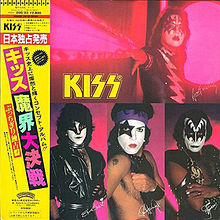 “Music From The Elder” is the ninth studio album released by American rock band Kiss. A substantial departure from their previous output with its epic concept and orchestral elements, album sales were so poor that Kiss did not embark on a supporting tour for the first time in its eight-year history, opting instead to make a handful of promotional appearances.

Various editions have paper or plastic inner sleeves, lyric sheets and even incorrect track listings on the back cover. No difference in value is noted between variations.

Be the first to review “Kiss: Music From The Elder” Cancel reply