Their Satanic Majesties Request is the sixth studio album by The Rolling Stones and was released in December 1967. Its title is a play on the “Her Britannic Majesty requests and requires…” text that appears inside a British passport.  The album was the first, and only, album produced by the Stones themselves.

This original release of the album featured a glued on three-dimensional cover picture of the band by photographer Michael Cooper. When viewed in a certain way, the lenticular image image shows the faces of the band members turning towards each other with the exception of Jagger, his hands crossed in front of him. Examining the cover closely, one can make out the faces of the four Beatles. 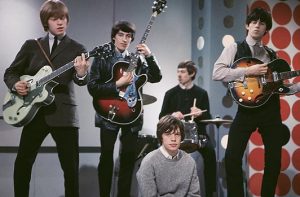 Be the first to review “Rolling Stones, The: Their Satanic Majesties Request (Holographic Cover)” Cancel reply