“Sticky Fingers” is the ninth British and 11th American studio album by The Rolling Stones, released in April 1971. In 2003, Sticky Fingers was listed as No. 63 on Rolling Stone magazine’s list of The 500 Greatest Albums of All Time. Audiophile. Original Master Recording. Extremely Rare. Mobile Fidelity MFSL 1-060. 1969. Mint*****

The album’s artwork emphasizes the suggestive innuendo of the Sticky Fingers title, showing a close-up of a jeans-clad male crotch (rumored to be that of actor Joe Dallesandro) with the visible outline of a large penis; the cover of the original (vinyl) release featured a working zipper and mock belt buckle that opened to reveal cotton briefs.

In 2003, Sticky Fingers was listed as No. 63 on Rolling Stone magazine’s list of The 500 Greatest Albums of All Time. 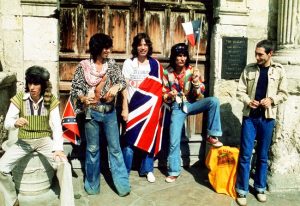 Be the first to review “Rolling Stones, The: Sticky Fingers” Cancel reply