Mike Oldfield’s Single / Froggy Went A-Courting is a UK only single by Mike Oldfield from 1974. Oldfield produced this new piece in place of the American single. Instead of using either of the 2 popular excerpts from that single, Oldfield chose to re-arrange a section of “Tubular Bells part 2” featuring Lindsay Cooper on oboe, who had played a similar section on Hergest Ridge.

Side 2 is the popular children’s song, set to a new melody by Oldfield, and spoken rather than sung by Mike Oldfield and Vanessa Branson (sister of Virgin boss Richard Branson), who take turns reciting lines. 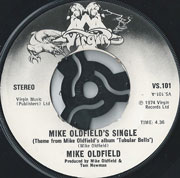