Tubular Bells is the debut record album of English musician Mike Oldfield, recorded when he was 19 and released in 1973. It was the first album released by Virgin Records and an early cornerstone of the company’s success.

Original Label. This album was mixed by means of the QS Matrix System for fully compatible Stereo and Quadraphonic Roll With The Flow / Roll With The Flow is a single by ex-Monkee Michael Nesmith from 1978. reproduction. LP Virgin QD 13-105 1973 ***** 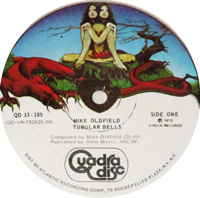