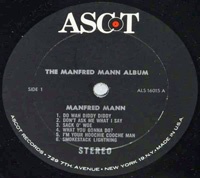 It contains the hit single “Do Wah Diddy Diddy”, as well as covers of well-known R&B hits such as “Smokestack Lightning” by Howlin’ Wolf, “I’m Your Hoochie Coochie Man” by Muddy Waters, and “Down the Road Apiece” by Will Bradley.

Be the first to review “Mann, Manfred: The Manfred Mann Album” Cancel reply