“Led Zeppelin II”  (Audiophile) is a collector’s edition of the second studio album by Led Zeppelin, released in October 1969 on Atlantic Records.

The album sleeve design was from a poster by David Juniper. His design was based on a photograph of the Jagdstaffel 11 Division of the German Air Force during World War I, the famed Flying Circus led by the Red Baron.

In 1989, Spin Magazine ranked the album No. 5 on its list of The 25 Greatest Albums of All Time. In 2000, Q magazine placed Led Zeppelin II at number 37 in its list of the 100 Greatest British Albums Ever.

In 2003, the album was ranked number 75 on Rolling Stone Magazine’s list of The 500 Greatest Albums of All Time. 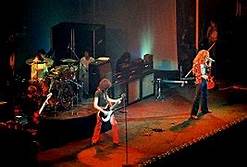