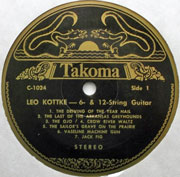 It is popularly known to aficionados as the Armadillo Album for its cover illustration of the animal illustrated on the distinctive cover. Art by Annie Elliott.

“6- & 12-String Guitar” is the album that captured Kottke’s eclectic, innovative style in all its crispness, melodic vitality and rhythmic urgency and gave notice to the world, or the part of it that pays attention to steel-string guitars, that 24-year-old Leo Kottke was [and  still is] remarkable.

One of the greatest solo guitar albums ever recorded.