“One World” is a 1977 album by John Martyn. One of his more experimental works, it features atmospheric, reggae influenced rhythms and free-flowing, jazzy arrangements.

On its initial LP release in 1978 the album was issued in two distinct and separate mixes: one for the U.K. release and the second for the U.S. release. 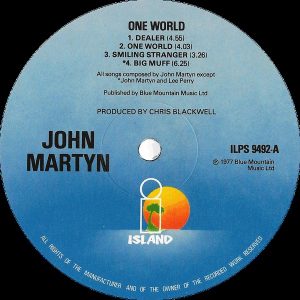 Be the first to review “Martyn, John: One World” Cancel reply