If “Yeah!” and “School Punks” were nonstop parties, Brownsville Station‘s fifth album, “Motor City Connection”, is the hangover, the one where the group reckons with the aftermath of having a good time all of the time. While the bandmembers were most at home tearing it up — as evidenced by the hardest-rocking numbers here — they still sounded good with a little more polish. And that variety makes “Motor City Connection” one of Brownsville Station‘s more intriguing albums, even if it’s not among their most consistent. 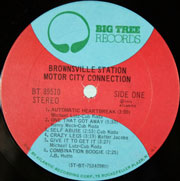 Brownsville Station is an American rock band from Ann Arbor Michigan that was popular in the 1970s. Original members included Cub Koda(guitarist/vocalist), Mike Lutz (guitarist/vocalist), T.J. Cronley (drummer), and Tony Driggins (bassist/vocals). Later members included Henry “H-Bomb” Weck (drummer) and Bruce Nazarian (guitarist/vocalist).  Brownsville Station’s early albums included song covers from bands which had inspired them. Their biggest hit, “Smokin’ In The Boys Room”, written by Michael Lutz and Cub Koda, from their 1973 LP “Yeah”, reached No. 3 on U.S.Billboard Hot 100 Chart and No. 27 in the UK Singles Chart. The track sold over two million copies and was awarded a Gold Disc status by the RIAA on 15 January 1974.