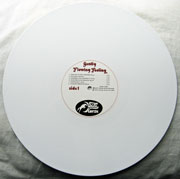 Whitehorse Records along with the Windy Distribution Company released and sold ten thousand copies of Gently Flowing Feeling  with the first thousand pressed in white vinyl. Several additional runs in black vinyl were made along with the customary cassette and eight-track tapes.