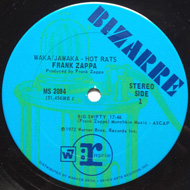 According to Zappa, the title “is something that showed up on a ouija board at one time.”

Be the first to review “Zappa, Frank: Waka/Jawaka” Cancel reply