“Nebraska” is the sixth studio album by Bruce Springsteen, released in 1982. Sparsely-recorded on a cassette-tape Portastudio, “Nebraska” was originally intended as a demonstration for later expansion into a “proper” album with a full band.

The album was ranked number 224 on Rolling Stone magazine’s list of The 500 Greatest Albums of All Time. 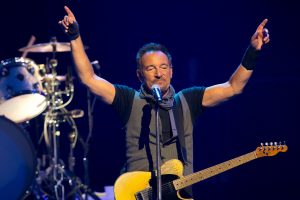 Be the first to review “Springsteen, Bruce: Nebraska” Cancel reply