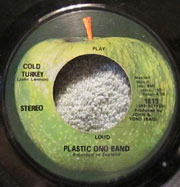 “Cold Turkey / Don’t Worry Kyoko” is a single by John Lennon, released in 1969 by The Plastic Ono Band on Apple Records. It is the second solo single issued by Lennon and featured Eric Clapton on guitar.

The writing credits for “Cold Turkey” featured only Lennon’s name, reflecting his split with McCartney and the Beatles.