“Stardust” is a 1978 album by Willie Nelson that spans the genres of pop, jazz, and country music. Its ten songs consist entirely of pop standards that Nelson picked from among his favorites.

In 1979, Nelson won a Grammy Award for Best Male Country Vocal Performance for the song “Georgia on My Mind”.

In 2003, the album was ranked number 257 on Rolling Stone Magazine’s list of The 500 Greatest Albums of All Time. In 2002, the album was certified quintuple platinum, and it was later inducted in the Grammy Hall of Fame class of 2015. 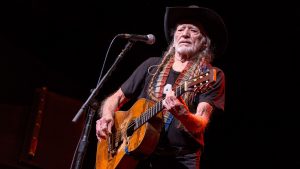 Be the first to review “Nelson, Willie: Stardust” Cancel reply