Mott is a 1973 album by British band Mott the Hoople. “All the Way from Memphis“, an edited version of which was released as a single, received considerable airplay on U.S. radio and captured the band many overseas fans, as well as reaching the UK Top 10. 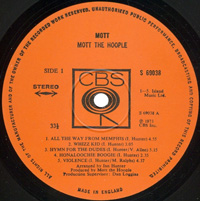 Be the first to review “Mott The Hoople: Mott” Cancel reply