“Sit Down Young Stranger” is Canadian singer Gordon Lightfoot’s 6th and also his best-selling original album. It was released in 1970 on the Reprise Records Label.

The album was renamed “If You Could Read My Mind” shortly after release due to the single by the same name reaching number #5 on the chart. The album itself reached #12 on the pop chart. 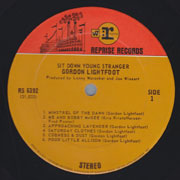 Be the first to review “Lightfoot, Gordon: Sit Down Young Stranger” Cancel reply