Zoolook is the seventh album by Jean Michel Jarre, released in 1984 on Disques Dreyfus. It makes extensive use of digital recording techniques and sampling. It is considered by many fans to be Jean Michel Jarre’s most experimental album to date. 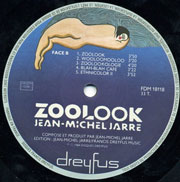