Thirteen is a 1986 Emmylou Harris album. The title came from its status as her thirteenth studio album (if one does not count her 1969 first album, released on an independent label, which Harris herself rarely acknowledges).

For unexplained reasons, the album was taken out of print a few years after its initial release, making it one of the most sought-after albums in Harris’ catalogue by fans, with used copies commanding unusually high prices on eBay and other used records sites. 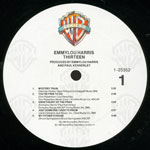 Be the first to review “Harris, Emmylou: Thirteen” Cancel reply