“Voices” is an album by pop duo Hall & Oates often seen as a revolution in the Hall & Oates sound, paving the way for future blockbusters like “Private Eyes”. It also was the first album that Hall & Oates produced by themselves, working in conjunction with renowned engineer Neil Kernon.

The original LP album cover was in black & white and had several variations with the duo in different poses. The half circle, sound-like waves were embossed and raised; a marketing technique commonly used in late ’70’s record sleeve packaging.

It was subsequently replaced in 1981 with a color photograph of the duo, excluding the original pose of Hall “escaping” from his white trench coat-like jacket. No “RE” of any type on back cover. Cover has embossed lettering and sound waves. Hall’s head almost touches the word “Voices” on front cover. 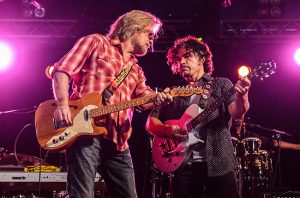 Be the first to review “Hall & Oates: Voices” Cancel reply