Trespass is the second studio album by Genesis and was recorded and released in 1970. Their last with guitarist Anthony Phillips, Trespass had a folk-flavoured progressive rock sound that was a marked departure from their earlier work.

The album served as the band’s debut in the United States, as From Genesis to Revelation was not initially released there. 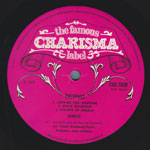 Be the first to review “Genesis: Trespass” Cancel reply