“Taking Tiger Mountain (By Strategy)” is the second solo album by English musician Brian Eno. Produced by Eno, it was originally released by Island Records in November 1974.

Participating musicians included guitarist and co-writer Phil Manzanera, who had played with Eno in Roxy Music and drummer Phil Collins “on loan” from Genesis. 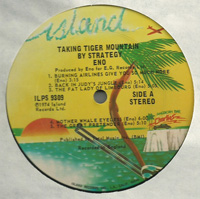