L.A. Woman is the sixth studio album by The Doors, and was released on April 19, 1971 on Elektra Records. The album was the last to feature the group’s lead singer, Jim Morrison, who unexpectedly died at the age of 27 three months following the album’s release.

Initially, the album’s front cover was released in the US and UK with a burgundy-colored, curved-corner cardboard cutout sleeve, framing a clear embossed cellophane insert, glued in from behind. Mylar Window with Band Facial Images. Yellow Album Sleeve. This is a copy of that first release. 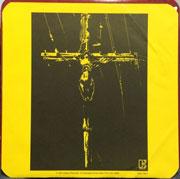 Be the first to review “Doors, The: L.A. Woman (Original)” Cancel reply