Deep Purple, also referred to as Deep Purple III, is the third studio album by Deep Purple, released in 1969 on Harvest Records in the UK and on Tetragrammaton in the US. It was to be the last album with the original line-up.

Tetragrammaton issued the album in a stark gatefold sleeve, wrapped around with a segmented illustration from Hieronymus Bosch’s painting “The Garden of Earthly Delights”. The label ran into difficulty over the use of the Museo del Prado-owned painting, which was incorrectly perceived in the US as being anti-religious – featuring “immoral scenes”; and was thus rejected or poorly stocked by many record shops. The original painting is in colour although it appeared on the LP in monochrome due to a printing error for the original layout and the band opted to keep it that way. 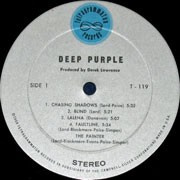 Be the first to review “Deep Purple: Deep Purple (US)” Cancel reply