Live Cream Volume II  is the second live compilation album by the British rock band Cream, released in March 1972 by Atco Records in the US. This album contains six tracks recorded at various performances from 9 March to 4 October 1968.

B2 is wrongly credited as “Hideaway” on label. 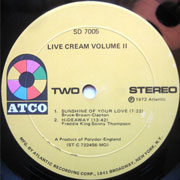