The album was released in the US in September. Early North American copies of the album, while distributed by Atlantic, bore the Track Records imprint; later pressings were released on the Atlantic label proper.

The album is considered a classic of the late-1960s psychedelic scene and a significant influence on progressive rock. 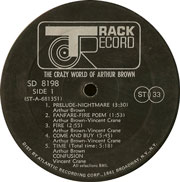 Be the first to review “Brown, Arthur: The Crazy World Of Arthur Brown” Cancel reply