Abbey Road (Audiophile) is an Original Master Recording of the the eleventh studio album by The Beatles released by Mobile Fidelity in 1979.

Abbey Road is regarded as one of The Beatles’ most tightly constructed albums, although the band was barely operating as a functioning unit at the time.

Rolling Stone magazine listed it as number 14 on their 500 Greatest Albums Of All Time. 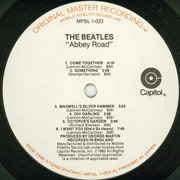 Be the first to review “Beatles, The: Abbey Road (Audiophile)” Cancel reply