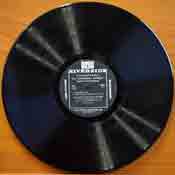 The groundbreaking album launched “soul jazz”, according to NPR, bridging “the gap between bebop and funk”.

Originally released by Riverside Records, the album has been reissued on CD several times since 1991 by Riverside and OJC. Producer and jazz critic Orrin Keepnews described the album as “the birth of contemporary live recording”.

Be the first to review “Adderley, Cannonball: The Cannonball Adderley Quintet In San Francisco” Cancel reply