“Habits Old and New” is an album by country artist Hank Williams Jr. “Habits Old and New” is the thirty-first studio album by the country music artist and was released under Elektra Records/Curb Records in June 1980. It also was Williams’ third full-length album in a fourteen-month span, following “Family Tradition” and “Whiskey Bent and Hell Bound” that were released in April and November 1979. It was also his fifth album on the Elektra/Curb label. Released in 1980 under Elektra Records. 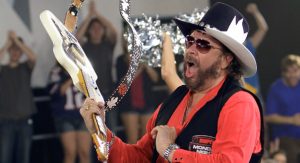