“East Broadway Rundown” is a 1966 album by legendary jazz saxophonist Sonny Rollins, his last album before industry pressures led him to take a six year hiatus.

The album represents one of his more notable experiments with free jazz and has been critically described as among his 60s “jewels”. 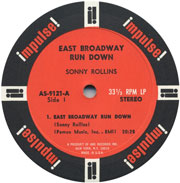