Here Come the Warm Jets is the debut solo album by Brian Eno, credited only as “Eno”. Produced by him, it was released on Island Records in January 1974.

The album features various guest musicians, including members of Roxy Music, Hawkwind, Matching Mole and Pink Fairies, as well as Chris Spedding, and Robert Fripp of King Crimson, who collaborated with Eno a year before in (No Pussyfooting). 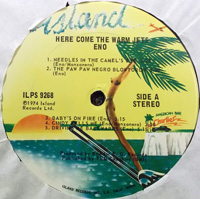