“Expression” is one of John Coltrane’s last recordings, and was released shortly after his death. Original Issue. Original Label. Gatefold cover. 1967. Impulse A-9120. VG*****

“Expression” is one of John Coltrane’s last recordings, and was released shortly after his death. Recorded at two sessions in early 1967, “Expression” represents John Coltrane’s varied and searching approach to recording, and has Coltrane sharing space with fellow universal travelers Pharoah Sanders, Jimmy Garrison, Rashied Ali, and wife Alice Coltrane.

Also worthy of note, the album was recorded at about the same time as the LP“Interstellar Space”; and that the song “To Be” features Coltrane on flute, the only recording he made on the instrument for an entire track. 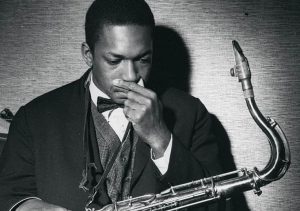 Be the first to review “Coltrane, John: Expression” Cancel reply