Both of these tracks were from a famous February, 1966 session made privately for Coltrane in San Francisco where the band also recorded versions of “Leo” and “Peace on Earth”, both of which would appear (with new arrangements) on the infamous 1972 issue Infinity.

On that album and this one, it appears that Alice Coltrane wanted to “work”, so to speak, with her departed husband. On Infinity, she does this by separating parts of the original pieces and replacing them with her own harp, organ, and string arrangements.

On this album, she actually records some new pieces to play alongside the untouched original versions of John’s music. “Lord, Help Me To Be” and “The Sun” were originally released by Alice Coltrane on the album “A Monastic Trio”, after her husband’s death, . 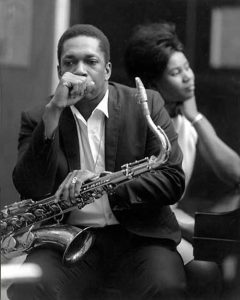