June 1, 1974 is a live album of songs performed at the Rainbow Theatre in London on the titular date. The album is officially attributed to Kevin Ayers, John Cale, Brian Eno and Nico, although other well-known musicians, including Mike Oldfield, Robert Wyatt and Ollie Halsall, also contributed to the concert. It is also informally known as the ACNE Album, i.e. “Ayers, Cale, Nico, Eno“. Original Label. LP Island ILPS 9291 1974 ***** 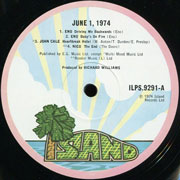